Recalculating: A Story Of My Life

On Sunday morning I plugged an address into my GPS for a church building in Spanish Fork where a friend was giving his missionary homecoming talk. It was an estimated 20 minutes away and at about minute 18 I saw the telltale white steeple come into view and turned a corner to see what I thought was my destination on the left side of the road. According to my GPS, however, this was not the place and rather than turning into the parking lot, I was directed to keep driving. I looked from my phone out my windshield in surprise: The road I was on did not continue very much farther. In fact, it ended rather abruptly at a dead end  in a field pretty much in the middle of nowhere: 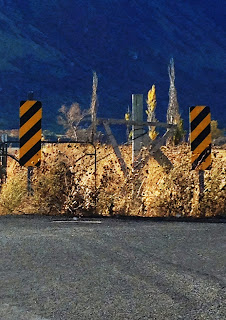 Perplexed, I pulled to the side of the road and reentered the address, sure that the church I was seeing was where I was supposed to be. But the GPS returned the same results, so I slowly drove down the road. To my surprise and relief, just as I reached what I thought was the dead end, a small road -- a path, really -- branched off to the right. As I followed the next set of directions and turned onto it, another steeple came almost immediately into view. Reassured, I continued on my way to my final destination in perfect time to hear my friend speak beautifully on the challenges of this life: "Because He loves us, God will not leave us sitting where we are", he said, "He will move us to where we need to be. Or, more correctly, he will move us to move."

I was reminded of the experience I had just had getting to the church building and was suddenly struck by the overwhelming relevance it has to my life right now.

Ever since I finished grad school and moved back to Utah, I have been struggling to find purpose in my life. I no longer have tangible, measurable goals to prove I am progressing. I have desires that are unfulfilled. Dreams that are deferred. But more than the disappointment of these is the ache of not feeling useful. Necessary. Needed. Over the past several months, this lack of purpose that has been viciously corroding my sense of worth. Over the past few weeks, it has left me hollow.

I reached a point in my life where I thought I was supposed to end up. I was heartbreakingly incorrect in that hope. But I am not moving on. I am parked on the side of my life with a view of where I wish I was, but where I know I don't belong. Yet as I look ahead of me, I can't see anything to suggest that a better destination is ahead. From my perspective there are only dead ends and empty fields in my future.

I believe in God. I believe He loves his children. I believe that because of that love, He has a plan for them so that they can return to Him as their best selves. But I find I am lacking the faith that God, His love, and His plan apply to me.

Lord, I believe; help thou mine unbelief.
lightning struck meagan at 2:12 AM 7 comments:

pictures on this blog are from the wonderful world of google images. unless they're especially awesome, then they're probably mine.